An across town journey to the cross.

We've put together an interactive journey that will take you around Lubbock and guide you through the story of Easter. You can do this as an entire family or as an individual, but we hope you take this opportunity to get out of the house, safely we might add, and reflect on what Jesus did for us all those years ago.

You can pick up packets with all the instructions, supplies, and communion elements at the church!
Packets available Now through Friday, April 10 between 1-6 pm.

Each different location will represent the next piece of the story of Holy Week. At the end of the journey, Jesus will be buried in the grave. We will celebrate his resurrection on Easter through one of our worship experiences.

Make sure to plan a good amount of time to work through each location. You will start out at the airport and will work your way back to Aldersgate Church. It is up to you how long you spend in each space. Take time exploring or engaging in scripture until you are ready to move to the next location.

The majority of our scriptures for this journey come from the book of Mark. At each new location take time to look up the scripture in the Bible and read over the words imagining the story as it unfolds.

After reading through the scripture, engage in the reflection material. This will guide you through the thoughts and emotions experienced during Holy Week and give you a way to apply it into your own life.

After each piece of scripture and reflection there is a prayer prompt. It is our hope that you use these prompts to guide yourself through a conversation with the Lord and walk you through the repentance and peace that follows Holy week.

For Families: The activities are woven into the different pieces at each location. By taking time to work through each activity you will be able to have conversation about that part of the story and a physical action to help you remember the key piece of the story.

This is a guide to help you experience Holy Week in a real and tangible way. Take the time to process the words the way your family needs to hear them. Feel free to make any adjustment to make this experience better fit those around you. We just want you to walk through this story together. 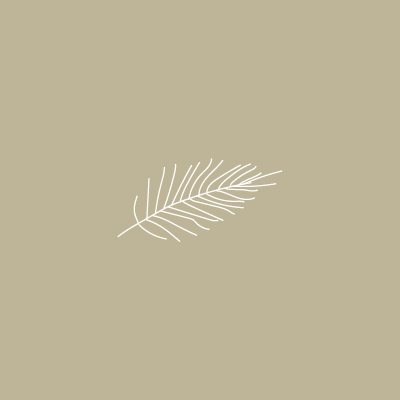 The airport represents the entrance to the city. The first story on the journey has Jesus entering a new city offering peace. When you arrive, find a place to park. We suggest the "Cell Phone Area". Directions

Activity: Palm leaves made by drawing and cutting out the hands of each person in the family. Supplies: Green construction paper, popsicle stick, scissors, glue stick. Example here.

Reflect: During these times, kings would often enter a city on the back of a donkey because the donkey was a symbol of peace. So, to enter a city while riding a donkey was in essence saying that they are entering in peace.  Jesus is entering the city displaying signs of peace even though He knows it will not change the outcome. He did not allow the actions of other people dictate His actions toward them. Jesus wants us to go through our lives in a peaceful way in spite of what others do to us. How can we show others peace during this time?

Pray for God to show you ways to share peace during this unprecedented time. 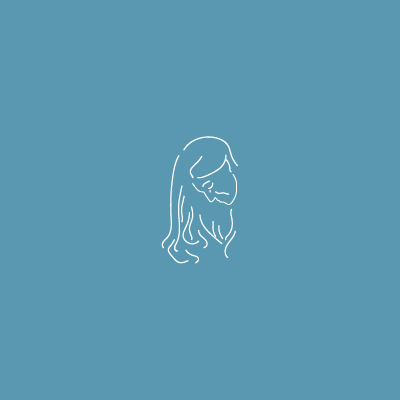 Jesus is anointed at Bethany

Drive around the park until you find a bench, a nice tree to sit under, or whatever looks like a nice place to sit and read. The park represents a place near the city like where Jesus traveled to Simon's house. Directions

Activity: Make a list of different ways you can honor Jesus in your everyday life.

Reflect: Honor Jesus in the way we can.  Jesus desires for each person to show their love for Him, to honor them, in the ways that they can. Jesus was pleased with this woman because she honored Him in the way that she could, even though the others there thought she was being wasteful.

Pray that God would guide you to honor Him each day.  That even though it may seem wasteful to the world, God is pleased with the ways we show Him love and honor. 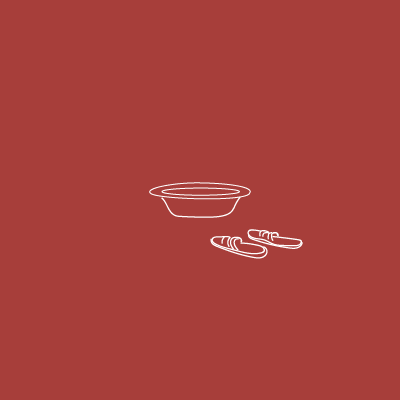 Park near the Seal Statue at the entrance to Texas Tech Campus. The fountain is near by. Take sometime walking around the fountain and thinking about all the students whose college semester has unexpectedly changed. Directions

Activity: Stick your feet in the water and “wash” them off, take turns drying the feet of the different members of your family. Supplies: Washcloth.

Reflect: Jesus washing the feet of the disciples occurred in the upper room, during the Last Supper and has significance in three ways. For Jesus, it was the display of His humility and His servanthood. For the disciples, the washing of their feet was in direct contrast to their heart attitudes at that time. For us, washing feet is symbolic of our role in the body of Christ.  The disciples must have been stunned at this act of humility and condescension, that Christ, their Lord and master, should wash the feet of His disciples, when it was their proper work to have washed His.  He came “not to be served but to serve, and to give his life as a ransom for many.” The humility expressed by His act with towel and basin foreshadowed His ultimate act of humility and love on the cross. What is one thing you can do to serve others that most people do not want to do?

Pray for God to lead you in serving others and pray for an open heart to hear His words.  Pray for trust that He is leading you, even when it is out of your comfort zone. 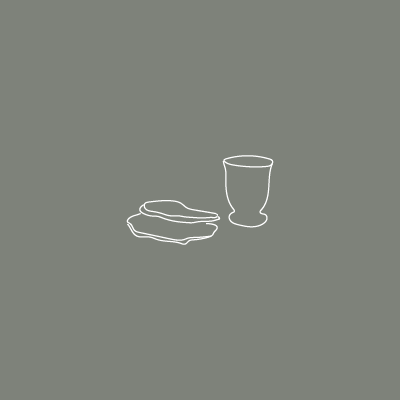 Your family gets to decide where to head for this one. Pick a place that you love or eat at often. Park in the parking lot and settle in your car for the story.

Activity: This is a trying time for anybody in the restaurant business, including the business you drove to. For this activity we are going to do our part in covering their business in prayer. Pray over the owners and employees, pray everyone going in and out of the building to be healthy and safe, and pray for the Lord to bless their business during the coming months.

Reflect: As Jesus and the twelve disciples eat, Jesus is telling them of His coming suffering. Jesus breaks the bread, pours the wine and tells them that they take these things in remembrance of Him. The bread, as a symbol of His flesh and the wine as a symbol of His blood that He will sacrifice for them.Jesus then states that one of them at the table will betray Him. Instead of being outraged, the disciples talked among themselves about who it would be. This lead to an argument about which of them was the greatest disciple. In Luke 22:25-30, Jesus basically tells them that they are all equal and reigns in the discussion.Peter then tells Jesus that he is ready to die for Him. Jesus then reveals to Peter that before the rooster crows he will deny knowing Him three times. I am sure that Peter was shocked by this revelation and never thought it could happen.

Pray that you may follow Jesus with a fierceness, that even in the face of betrayal, your loyalty stays with the One that gave His life for you. 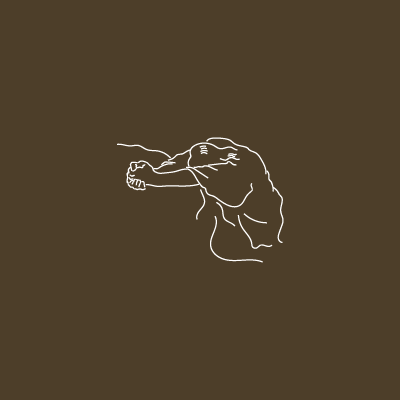 Jesus Prays in the Garden

Park your car and go explore the flowers and trees through out the arboretum. In this story Jesus visit a garden to have a hard conversation with God. Directions

Activity: Kneel down under a tree or in the garden. Use the dissolvable paper to write down the hard things Jesus is asking you to do. Pray and ask Jesus to help you do those hard things and use the cup and water to dissolve the paper away. Talk about how we can hand over the hard things to Jesus and he helps us take care of them. Supplies: Dissolvable paper, plastic cup, small bottle of water, pencil

Reflect: Jesus knew all the pain and suffering he was about to experience. Can you sense his anguish? Do you feel his struggle? Yet he still says “not my will, but yours be done”. Jesus’ sacrifice wasn’t a spur of the moment decision. He deliberately chose to take the journey to the cross – in spite of the great cost. Is there an area of your life where you need to make a choice to love and sacrifice – even if it comes with a cost?

Pray Is there an area of your life where you need to make a choice to love and sacrifice – even if it comes with a cost? 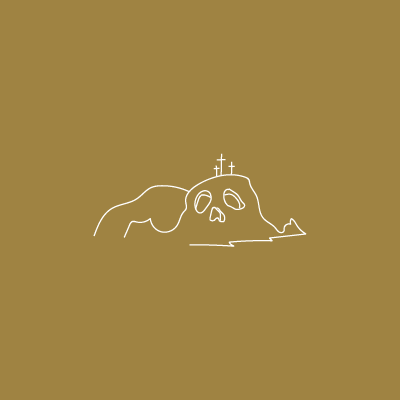 Place where Jesus died was a desolate, rocky  place. When you arrive at the park, take time to observe the wide open spaces. Walk around and see if you can find any rocks to remind you of the place Jesus died. Directions

Activity: Light a candle, read the verses, and blow the flame out as a symbol of Jesus dying. Supplies: Birthday candle, match

Reflect: How much is your integrity worth? Would you betray a friend for twenty thousand dollars?  Why do we seem to compromise our values so quickly for money? In what ways do we give in and take the easy and lazy road even if it means being part of injustice? Some deaths are quick. Some deaths are noble. This death was neither. It’s one thing to kill a man. It’s another to shame and humiliate him. Think for a second… That the King of heaven has spit on his face. O the divine disgrace of our Savior.

Pray and ask for forgiveness for times you have denied Jesus even in the small things. Pray for His forgiveness to roll over you like a wave. He loves you still. 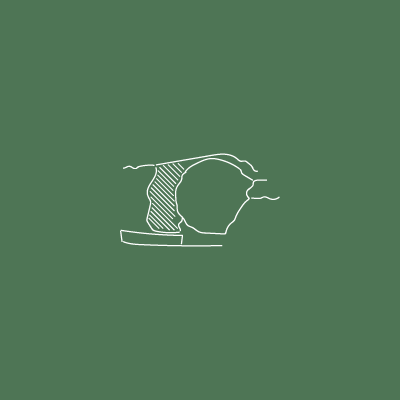 Find the hill with three cross and empty tomb on the east side of the parking lot.

Activity: After you have read through the story of Jesus' burial, grab the plastic streamer from your bag. Cut it into enough piece for each person in your car to have a strip. Tie each strip around one of the wooden crosses. The Easter story unites all believers each and every year. This year we are separated for the safety of others, but by adding your streamer to the cross we are reminded of the community of believers around us. Take time to see all the other colors and take in the peace that we will once again worship all together in the future. ‍

Pray that God would prepare your heart for a time of renewal. Pray for wisdom and belief, even in the darkest times. It’s Friday, but Sunday’s coming!